RIVIERA CLUB IS PUTTING TOGETHER FOR THE FIRST TIME THE BEST SOUL, GARAGE, PSYCHEDELIC, LATIN MUSIC IN BERLIN.

THERE WILL BE ON STAGE TWO OF NEW SENSATIONS OF THE BERLIN UNDERGROUND SCENE AND AS CHERRY ON THE CAKE COCO MARIA AND BAROX TO MAKE THE NIGHT UNFORGETTABLE WITH THE MOST DANCEABLE MUSIC YOU’VE EVER HEARD.

NO INDIE, NO TECHNO, THIS IS RIVIERA 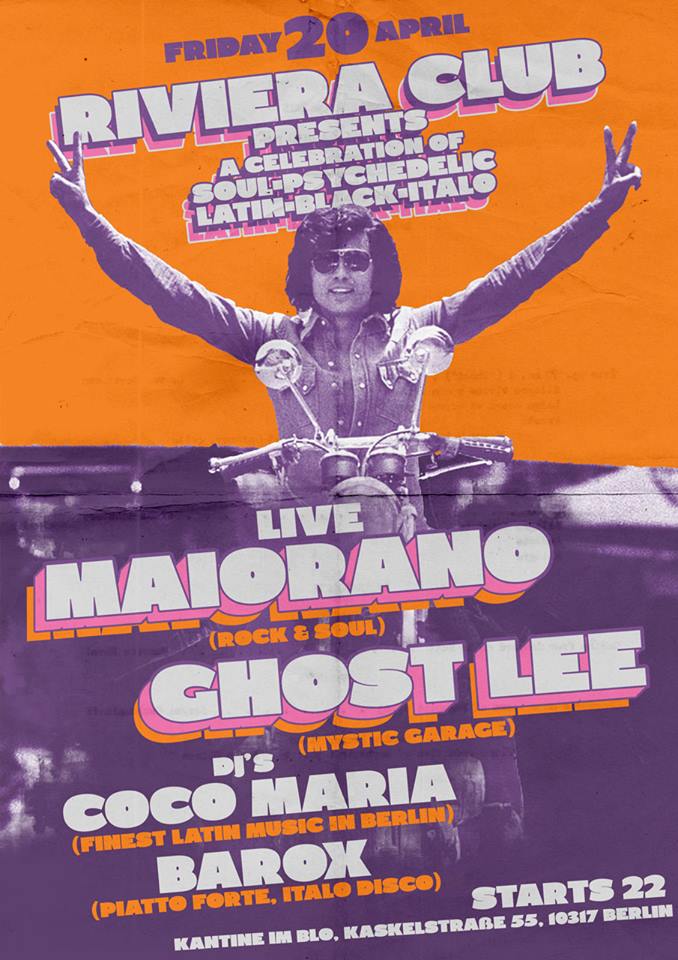 MAIORANO (Rock and Roll – Soul Berlin-Italy)
Berlin-based collective MAIORANO skillfully fuse elements from 60s R&B, Funk & Soul with the intensity and attitude of Garage & Punk rock to create a vibrant sound steeped in Rock ‘n’ Roll heritage. While the music may be difficult to pigeon-hole, its appeal is instant and infectious. Dynamic & charismatic Italian front-man Alex Maiorano leads a stylish sextet composed of saxophone, trumpet, organ, guitar, bass & drums through powerful, lively & emotional songs which connect with the heart and soul of the audience.

GHOST LEE (Mystic Garage Berlin)
Ghost Lee is a new musical collective based in Berlin, masterminded from the psychedelic genius of Tito Lee (Tito and the Brainsuckers, Electric Flashbacks, Leighton Koizumi), devoted to the most obscure, intense magnetic sounds from the psychedelic vaults.The band performs a kind of soft psychedelia in the style of West Coast Pop Art Experimental Band, Orient Express, Spacemen 3, blended with fuzz ripping influences in the most genuine sixties garage tradition.

COCO MARIA (Best Latin music in Berlin)
Coco Maria is a colourful lady from the north of Mexico shaking down the Berlin scene with her classy and funky record collection mainly from Brazil, Peru, Colombia and The Antilles.

BAROX (Italo disco)
Responsible to have opened one of the best record store that Kreuzberg ever had (Il Piatto Forte), Michele was also the drummer of Negazione. He is going to spin the most rare and crazy Italo Disco music you have ever heard.