Workshop: Momentography of a Failure

We are delighted to invite you to the Workshop Momentography of a Failure held by the artist Nafiseh Fathollahzadeh together with Parham Mortazavian, architect and urbanist.

The Workshop will be Saturday 6th and Sunday 7th of October 2018, in the BLO Ateliers and around Lichtenberg and Marzahn.

The workshop is open and free, but we have a limited number of participants. So please if you are interested, send us a Mail to reserve „your place“.
Contact: blo-huj@riseup.net 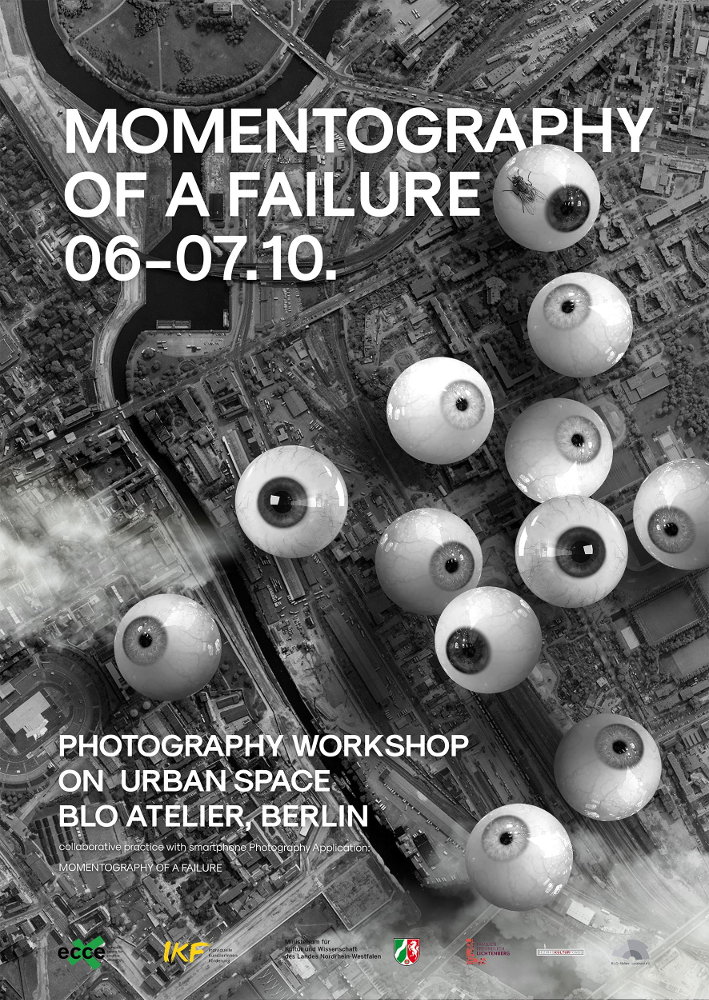 Post Photography?!
In the context of a hyper-documented world, practices such as photo-sharing and citizen journalism democratize the photographic medium and promote yet another dematerialization of authorship. It formulates Alternative models of authorship: co-authoring, collaborative creation, interactivity, strategic anonymities in which creative practices encourages “sharing is better than owning” and renounces Glamour and marketing in favour of a cultural activism. Discourses of originality are delegitimized and practices of adoption, recycling and remixing are standardized. The desire for immanence and immortality is replaced by a desire for transience and simultaneity. The economy of means surrenders to transmediality. Each citizen becomes a photo-journalist, the “first on the scene”.

Momentography of a Failure seeks to develop a concept of citizenship through the photographic practices in which the relations between the three parties involved in the photographic act-the photographed, the photographer, the spectator – are not mediated through a sovereign power and are not limited to the bounds of a nation-state or an economic contract.

The “Failure” bears a double meaning which can emphasize a problem or an achievement according to the context of the submitted photograph and its category. “Momentography of a Failure” addresses photographers to submit their Momentographs (photographs) of a “Failure” in different categories like Labour Rights, Racism, Public space, Freedom, etc and pin it on the world map each defined by a specific colour.

Workshop
The workshop for the Project Hier & Jetzt: Connections consists of two parts. In the first part, Parham Mortazavian and Nafiseh Fathollahzadeh will provide a theoretic input regarding East Berlin’s urban structure with a focus on transitory space of Berlin’s periphery, housing blocks in Marzahn and Lichtenberg and the changing socio-spatial space of East Berlin. It will be followed with a walking tour in some areas and visiting the landmarks of the past East. At the end of the first day, participants will discuss their interest within a brainstorming gathering and they should decide for their subject of photographic work for the next day. In the second part, participants should work on their subject matter and provide photographs. The photographs will be discussed in the group and the final result will be archived in the Momentography of a Failure application.

Nafiseh Fathollahzadeh was born in Iran. She studied Master of photographic studies and practice in Folkwang university of Arts. Her work oscillates between different approaches to documentary and staged photography with a focus on topics such as urban spaces, urban planning and socio-cultural structures, globalization and homogenization and inclusion and exclusion in the urban space. Her works deal with the ways of appropriation and collaboration, forms of extended authorship and the democratization and dematerialization of the photographic medium.

Parham Mortazavian was born in Iran. He studied Architecture in Tehran which was followed by a Master of Science in Urban Management in Technische Universität Berlin. His focus in practice and in research is on how social practices create and change the urban space in different social, political and regulatory processes. He has been working on alternative urban settlements, from co-living spaces in Berlin at id22:Institute for creative sustainability, Tehran’s urban renewal project at the slum district in the south of Tehran in an upgrading and enabling company Currently as the researcher/program planner at Raf Projects e.V, in a team he organises art shows and residencies such as a recent one at ZKU Berlin. Recently and in collaboration with CLB Berlin, he is working on a knowledge exchange program between Berlin and Tehran, including symposiums, exhibitions and urban interventions bringing academics, architects and artists together in both cities.